Crime in the 19th Century 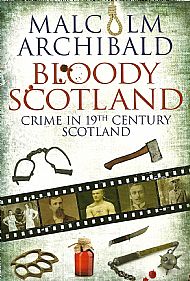 Crime has always been with us and probably always will be. Theft, murder, assault, robbery and rape are as common now as they were in the Dark Ages or the Middle ages, but in the 19th century there was an upsurge of interest in crime and the reasons for crime.

The world was changing fast. Explorers were pushing out the boundaries and making new discoveries year on year while at home the country was altering from rural to urban. Faced with a growing population and expanding cities, the authorities felt a bit overwhelmed. Their long standing methods of dealing with crime were swamped. They needed new ideas, and so was born the professional uniformed police force.

In 1800 Glasgow became the first city in Britain to have a professional police force. Edinburgh followed soon after, and Dundee and Aberdeen in their wake. These brave men had to control a massive amount of crime that encompassed nearly every facet of society.

I have had five books published that cover 19th century crime in Scotland's countryside and cities and one in England. There are also two novels about Sergeant Mendick a Victorian detective. There are more to follow!

The latest was published in April 2015: 'Liverpool: Gangs, Vice and Packet Rats'